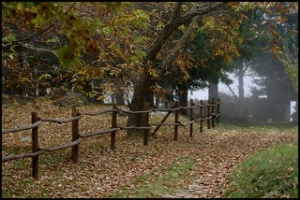 Image: a nice place for a stroll by Oryctes

September brings the return to work, the start of dodgy weather, and the last few things on the to-do list in readiness for the onslaught of enrolment.   This coincides with the receipt of external examiner reports, analysis of evaluations and surveys, and examination of conscience in order to write annual monitoring reports. Spiritually, many of us are making the dazed transition from ‘holiday head’ to ‘nail-biting professional’ while trying to remember passwords and what our jobs entail.

As we plough these activities we invariably come across comments – old and new – about student self evaluation. This year an external observation about the quality of critical reflection on one unit particularly stirred me up. The course in question uses formative journals during the unit and concludes with a summative written statement by the student reflecting on their learning. Nothing radical there, nor in the way the tasks encourages the personal voice, and use of diverse approaches to, and source materials for, self evaluation rather than prescribing a critique of academic literature on reflection.

However, despite a clear explanation of the reflective parameters and philosophy the fear was aired by the examiner that the students’ work was not ‘academic enough’, evidence of this being the lack of a substantial ‘academic’ bibliography.  This baffled me and made me ponder anew a whole set of questions. What was this ‘academic’ of which they spoke and how did they think it should be manifested in the context of the unit and discipline in question? Solely in a certain kind of literature and language? Surely not. Why does reflection have to be ‘academic’ to have validity? Does ‘academic’ mean delving into the literature of how we learn as though the student is writing a subject-based essay, or making copious use of pedagogic sources on critical reflection with a view to shoring up the student’s own intuitive deductions? Adopting a strange third-person detachment in self- appraising which will automatically confer objectivity on the assessor?

I became thoughtful and collegially-indignant in equal measure. What was not clear enough in the reflective philosophy that meant that it was misunderstood by the observer? The guidance for the course stressed that while it would be essential to cite any sources drawn on, the emphasis was on the use of a range of materials for self-critique and inspiration which would not necessarily be those you would see in a formal essay.  It also made me fidgety because it made clear once again the lack of consensus that exists in terms of what reflection means  and how it might be expressed in an assessed curriculum.  The argument that insisting on a quasi – academic essay will naturally result in rigorous thought and intellectual engagement with reflection can be met with two instant responses: not necessarily and who said reflection had to be intellectual?  And why should academic or intellectual be the prime benchmark of effective or valuable reflection? Intellectual and academic are two models of thinking and are not de facto synonymous with insight and authentic self-enquiry, nor their sole preserve.

I have spent a decade discussing the distinctive characteristics of reflection, in spoken, written and audio-visual forms,with staff and students in diverse institutions and it is evident that many variations exist. Good educators try to nurture those approaches which best fit their particular subjects, contexts, philosophies and students. Some of these are at opposite poles of the formality spectrum and most of them have some kind of rationale for why they are the way they are. To suggest that only an academic form of reflection is acceptable limits our scope for enabling students to reflect meaningfully and having some say in how to articulate realisations that are of value to them.

All models of reflection can be engaged with well or badly – descriptive diarising, emotional confessions, a lack of evaluation or self critique, baseless assumptions or value judgements that have not been interrogated in any way.  It depends on how their use has been enabled. An open, narrative model can be honest and Illuminating and meaningful at best or meandering, stream-of-consciousness drivel.  Poor engagement with an academic model can serve up clunky positioning of theory to validate ones own beliefs or back up decisions made (a bit like some research, really) or unnatural detachment from experiences so they end up being considered as though removed from the individual, like an item for inspection in a bell jar.

So perhaps all of the above can be distilled into a plea for recognition across the disciplines that multiple forms of reflection have validity. Not only that, but that we should bandy about terms like ‘academic’ with caution and truly interrogate what we mean by them and why. It occurs to me that our chapters on PCP and Lego Serious Play offer rich avenues to precisely this sort of exploration.