Friday morning, July 1st, was damp, cool, slightly sticky. The train was crammed with passengers – no surprise there – jolting and swaying all the way to London. As I slipped my ticket into the barrier slot and came out onto the concourse at Waterloo I was conscious of a group forming a tableau. Its shape was blurred slightly by onlookers milling around it briefly, then dissipating into the haste of their onward travel. The group were World War 1 soldiers, alert, present, silent, making no eye contact, waiting for a train from a different time. Jostled by passing commuters I took a brief video, then a photo, then turned to leave. As I did so I noticed one, two, three soldiers, then more. And more. Grouped all around the station. Walking past singly, or in lines. I headed for the Tube, and as I descended the escalator a lone soldier handed a card to a traveller, with the name of a fallen comrade marked upon it. I felt stunned, emotional, dislocated by this strange presence from another world and time; feelings which increased as I walked through more groups, more lines, criss crossing through the passages of the Underground, focussed on their journey, detached and seemingly oblivious to the rest of us. As I headed along the moving walkway to the Jubilee line I heard first the tapping of boots stepping in unison, then saw a string of soldiers coming towards me. 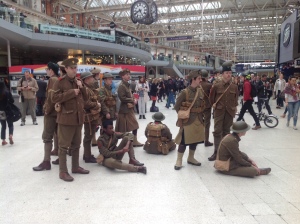 This image does little justice to the profound effect being among these other travellers had on me. It brought home in an embodied and visual way, right up close, the reality of the war, in a way no history book could have done. Most powerful was the way the soldiers were performing by being others, but not acting. The shock of their presence remained with me all day, something that I wished my family could have shared, not just seen in photographs later. At work I had to tell my colleagues what I had seen, frustrated (for them) that they had not shared in it too. That need to tell was part of a witness, a testimony, a not forgetting of the losses of 14-18 that were brought alive so strongly by this work of theatre, of art.

Alongside the thoughtfulness and emotion the soldiers inspired I found myself wondering “Who did this? And how did they manage to do orchestrate it in secrecy?” This sense of curiosity and fascination grew as I learned that the soldiers had not just been at Waterloo, they had been all over over the country, silently permeating our streets, shopping centres and everyday lives. #wearehere as the moniker for the commemoration was a stroke of genius in its simplicity, as it expressed reminder, yearning, memory, warning in three words. No better commemoration of the tragedy that was the Somme one hundred years ago.

My Go To pages